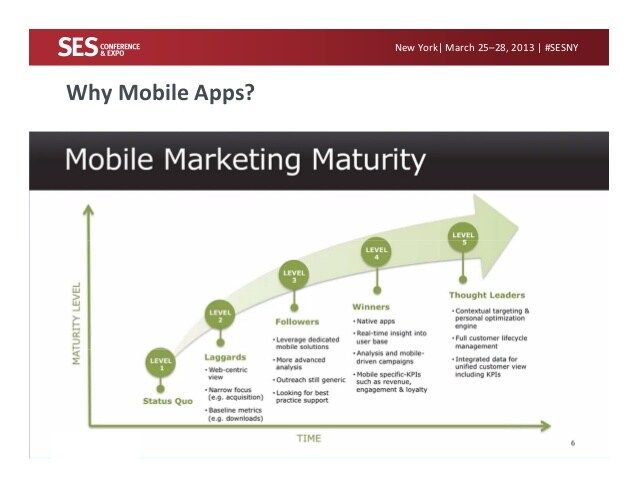 In this week’s blog post, Marcia Kadanoff, founder and CEO of Open Marketing, will feature as one innovator in Mobile Marketing that has been influential on us. Based in San Francisco, California, she has quite a successful career, being involved in start-ups such as « Firewhite Consulting, Inc. » and « Miller/Kadanoff/Huber Direct & Interactive. » She has also previously worked with Apple as an early innovator in mobile, and is currently in the process of writing a book entitled: « Awesome Mobile Content Marketing. »

The reason we have chosen to talk about her is because she was recently chosen as one of the speakers at the SES Talk in New York back in March. She really stood out at this as someone who has excelled in digital marketing, and has plenty of success in the field to prove it. At her talk, she discussed her graph ‘Why Mobile Apps?’ describing the reception mobile apps get from different types of consumers.

The idea of this is there are five different types of consumers depending on the time and level of maturity. Level one is status quo, level two are laggards, level three are followers, four are winners, and finally, level five are thought leaders. According to Marcia, it is thought that winners use native apps to get into mobile, whereas thought leaders aim at marketing contextually and attaining full customer management on mobile apps so as to put the state of mobile apps into context.

Other key parts to her talk at SES were on how the importance of loyalty in the mobile app industry can drive downloads, however it might be due to two things: more bad apps rushing into the market; or simply just more apps. As well as this, she emphasized that good analytics starts by asking the right questions. In order to do this, she applied the AARRR Model by VC Dave McClure. This is:

Acquisition: How do users find you?
Activation: Do users have a great first experience?
Retention: Do users use it subsequently?
Revenue: How do we make money?
Refer: Do users tell others?

With this model, Kadanoff applied it to three different types of analyses.

For Retention, Trend analysis would cover the change in the number of loyal users over time.

For Revenue, she talked about changes in average revenue per user (ARPU) in Trend analysis, assuming you’re monetezing your mobile app.

For Referrals, Trend analysis would cover changes in sentiment over time. For example, if your users are leaving product reviews, referring the application to others,  they can act as an important part of discovery on mobile devices.

So we’ve briefly summed up part of Marcia’s interesting talk at SES. Hope you enjoyed reading about her!

Sssh. It's a secret. We've been acquired.

Thank You Pages in Response to Landing Pages are a Changing

Nice video of me over on Jeremiah's blog

The future of the web is distributed